Iberdrola and the joint venture Navantia, S.A., S.M.E – Windar renovables seal their alliance until 2025 for the development of offshore wind energy. 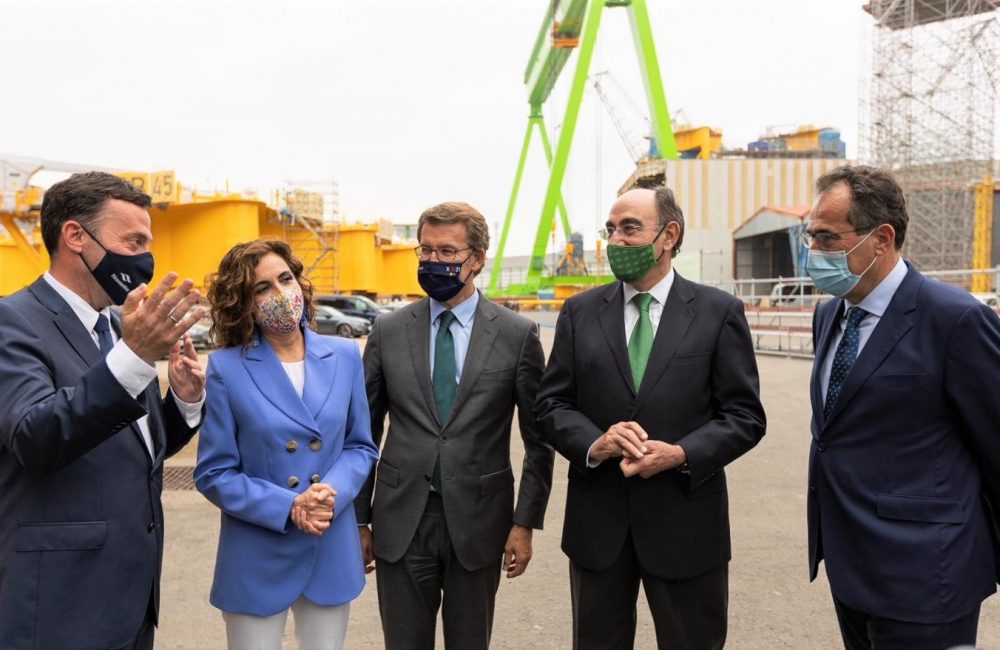 The presidents of Iberdrola, Navantia and Windar have signed a framework collaboration agreement for the manufacture and supply of XXL monopile foundations, a project with which the energy company advances in its growth strategy in the offshore wind market and strengthens its role as a driving force in the local industry, while the two manufacturers expand their capabilities in this sector of the future.

With this agreement, Iberdrola will be able to place orders for 130 XXL monopile foundations with the Navantia-Windar consortium between 2023 and 2025 for future offshore wind farms, worth up to 400 million euros, and will secure the preferential supply of a portion of these components for the coming years.

This alliance has been signed at Navantia’s shipyard in Fene by Ignacio S. Galán, president of Iberdrola; Ricardo Domínguez, president of Navantia; and Orlando Alonso, president of Windar. The event was also attended by the President of the Xunta de Galicia, Alberto Núñez Feijóo, and the Minister of Finance and Public Function, María Jesús Montero.

The Chairman of Iberdrola, Ignacio S. Galán, stressed that “today we are creating an alliance that combines Iberdrola’s growth plans – a portfolio of offshore wind projects that will require investments of close to 30,000 million in this decade around the world – with the competitiveness and know-how of Navantia and Windar”. “A union – he stressed – which, moreover, reflects our vocation to forge alliances with the Spanish industrial fabric, as the great driving company that we are, and which we always try to develop through long-term agreements, providing stability and certainty to our suppliers, generating activity and jobs in a sustained manner”. The framework agreement between the companies does not subscribe to a single project, but makes Windar and Navantia allies of Iberdrola in its sustainable development strategy at least until 2025.

Monopile factory in A Coruña As a result of this collaboration, the consortium formed by Navantia and Windar will start up a XXL monopiles factory in the Navantia shipyard in Fene (A Coruña). The construction of this factory will allow the improvement of the shipyard’s capacities, providing it with a new product which is the most demanded within the sector of fixed marine foundations. This diversification was not accessible until now because it required very specific facilities.

“We want to anticipate and invest in facilities, machinery and equipment of the latest technology to be relevant players in this market”, said the president of Navantia, Ricardo Domínguez. Thus, he stressed that this new collaboration with Windar and Iberdrola is an “innovative and ambitious project”, with which the public company consolidates and expands its commitment to a sector that “offers enormous opportunities”. “We are confident that, through this agreement, the relationship between the three companies will be further strengthened, which will undoubtedly benefit the Spanish industry and Ferrolterra,” he added.

The consortium’s projected investment amounts to 36 million euros and production at its facilities will generate quality employment for 1,000 people, in addition to the thousands of jobs already created with Iberdrola’s previous contracts. The works at this plant include the adaptation of a building for bending thick sheet metal with a diameter of up to 16 m, new paint booths and storage areas for finished products, as well as the latest technology equipment required for manufacturing,

The new XXL monopiles factory -which will manufacture foundations of more than 100 m in length and up to 2,500 t in weight- will be available within 13 months and will be located in a part of the Fene shipyard facility, without interfering with the production means destined to the construction of other offshore wind products, such as jackets and floating structures, in which Windar and Navantia are already a leading player at the international level.